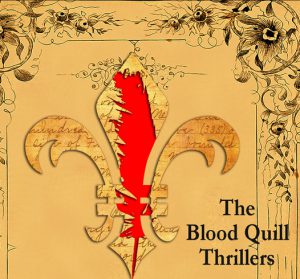 Mary Shelley quickly learned that monsters and magic can affect hunters even through death. Spells to mimic death, causing hunters to be buried alive began to happen. Hunters being turned into the beasts they fought. Curses on the soul.

In order to ensure her hunters were protected should they be incapacitated or killed; they were ordered to place a mark on their body to identify they were part of the League. Hunters who were also writers wore a blood-red quill on their bodies. Hunters who did not write, but who went out on missions were marked with black quills. Different colored quills represented what a League member did so, if something happened to them, it would be known to return their body to the nearest League sanctuary. There they would be examined for magic residue, curses, and a myriad of other hunter-monster related issues. Dead bodies would be properly disposed of, with respect, and the appropriate care as determined by what was found or what the hunter had been fighting. The idea was to save those who could be saved and let the dead rest in peace.

Blood quills hunters and “Legacy” hunters were the life’s blood of Mary Shelley’s League of Supernatural Hunters throughout time.

Copyright Sheila English 2023 - All Rights Reserved
Back To Top