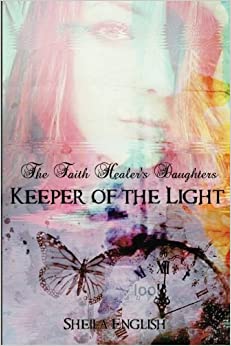 The Faith Healer’s Daughters is a trilogy, so there are three books.  It is considered a young adult and often I’m asked what age the book is written for.  It’s really hard to say for sure since everyone is different.  A mature twelve-year-old could read the books and not have a problem, a fourteen-year-old who is less mature might need to wait to read the books.  Only the parents or guardians of a child can really determine if it’s right for that teen.

I can say that if the books were a movie I think they’d be a PG-13.  There’s no sex, but there is the allure of sex addressed especially in book two- Keeper of the Dead.  It’s in there because I think teens do struggle with temptation.  So Amber and Ryan have to deal with that temptation because they are posing as husband and wife as they live and work at a large cemetery in Brooklyn, NY.  At first, they’re just friends, but they have to sleep in the same bed, and being that close, night after night, would present problems eventually.  I wanted to be realistic about the difficulties of physical attraction and both of the teens really struggle, but realize they need to resist.  Some of the scenes would be considered sexy, but there’s only kissing.

There’s violence in all three books.  Keeper of the Light starts out with the murder of the girl’s mother. Later on, a beloved character dies trying to help save one of the girls and though we see the character later as a ghost, it’s a tragic event.

The father wants to get the girls back and use their power.  It’s his intention to marry them to men of his choosing.  His compound is cult-like and the men there have multiple wives.  The girls want to disband this cult and save the women and children who live there.

There are adult themes and situations.  Issues like giving a life to save a life, consequences, death, forced marriage, some women in the compound help the men keep other women in line.  One of the sisters is forced to marry a very bad man.  The third sister, Elizabeth was the only one raised by the father and her allegiance is with him, so issues of brainwashing and betrayal are addressed.  The afterlife, what might be out there, souls, and how they can be manipulated are also addressed.

There are good lessons in the books.  We talk about what makes up family.  We talk about loyalty and sisterhood.  Issues of abstinence are addressed in a way a teen can connect to.  Thinking beyond yourself, learning others are just as important as you are also addressed.

I wanted teens to see themselves when they read the story of these characters and feel a connection to them and their plight.  But, I also wanted parents to see this as a way to address real-life challenges teens face.

I hope this information helps you determine if this book is for you, or your teen.